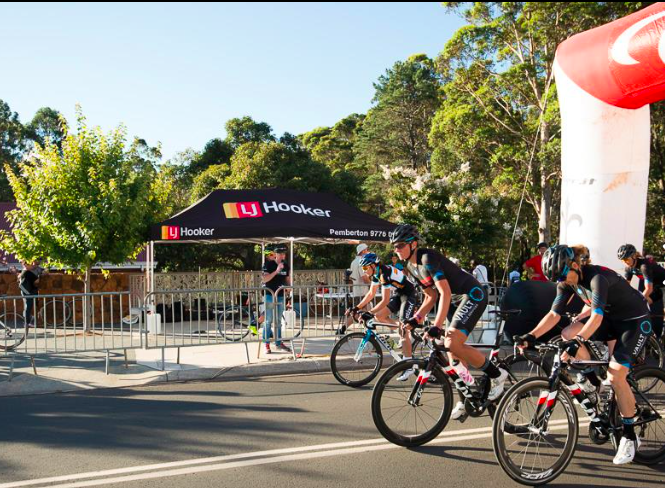 Liz Leyden reports from the Pemberton Classic. A tough criterium and road race over the long weekend in March, has traditionally tested the best bike riders from across the state.

Now in its 12th year the Pemberton Cycling Classic is one not to be missed! Saturday afternoon the Criterium “Race arounrd the Town” commenced with the under 13 Boys and Girls first cabs off the rank.

With the State TT Champs and riders racing interstate and overseas the Women’s A Grade field may have been on the miniature side but the quality of the race was not to be underestimated.

On the line we were told separate womens race and no sitting on B Grade Men. So on that note the gun went and Carmen De Rooze was quick to go to the front taking the right hand corner in a spectacular and speedy fashion showing the rest of us how to gap the field in style.

Jade Haines was quick to follow not letting Carmen get more than a bike length away. With six minutes to go Melissa Robinson pulled a strong turn before the final right hand turn with Carmen on her wheel. Next time through the start finish with two laps to go there was Carmen, myself and Jade with a gap back to Melissa and Stef.

On the final lap Carmen dug deep trying to attack at the beginning of the finishing straight. With 200 metres to go Jade jumped around Carmen to take the win and myself jumping around Carmen as she started to fade to take out 2nd!

The Pemberton Classic Road Race was held Sunday morning. Again we had a separate womens event allowing for some honest and assertive racing. I took the lead on lap one setting the pace up Pump Hill. At the ascent of the climb there was Carmen, Jade and myself with a gap but it wasn’t too long before we were re-joined with Mel and Stef.

There wasn’t much happening in the first 10 to 15ks with Mel and Stef keeping the pace at the front. We didn’t have a race plan but just before the 20k mark Mel attacked and had a gap. Catching the field off guard I managed to jump to join Mel but Mel having pulled a 5 k turn earlier was feeling the pinch and went back to the group.

I looked over my shoulder and realized I still had a gap and with the thought well if I don’t have a go I will never know, and put the pedal down and kept driving it. After lap one I had opened up a 1.5 minute lead and just kept telling myself to ride those hills hard to try and keep or extend the lead. First time for everything but I managed to stay away with the solo break and lead to take out my very first win of the Pemberton Cycling Classic Road Race!!

The rest of the field came in a few minutes later with Jade Haines taking out second and Mel Robinson with a very fast approaching third! It was a great weekend of racing and Nicheliving Vault Racing taking out the podium places on the day!

A big thank you to all the sponsors who contributed to the event and the local club for again providing a well supported and organised event.

4 years ago / Comments Off on Pemberton Classic 2016