BY admin IN Exercise Institute News On June 3, 2016

Fueling yourself whilst exercising is an important habit for event days. Whilst there is much conjecture around what is ‘best’ for the individual, contemporary science has managed to fine tune optimal eating strategy during intensive physical exercise.

Carbohydrate has been implicated as an important fuel source during exercise and for good reason. Generally speaking ingesting (eating) carbohydrate (CHO)  fuels exercise by entering the blood stream, replacing lost muscle and liver glycogen, an end product of CHO, stores. This becomes increasingly important after 1 hour of strenuous exercise.

Muscle and liver glycogen stores become depleted after an hour of strenuous exercise. Your body stores glycogen as a fuel source in both the liver and muscle allowing a good amount of exercise to be completed without any in take of CHO required. Carbohydrate is easily converted to fuel, more so than fats or protein, and can enter the bloodstream particularly quickly, thereby enabling the body to utilise the energy somewhat immediately.

The different forms of Carbohydrate, however, are not all equal. Carbohydrate comes in a great array of different forms. Research has looked into what forms may best suit individuals when exercising. Obviously there is some inter-individual variance in the results, but an analysis of effect size and between group differences reveals interesting findings.

To surmise much of contemporary findings CHO ingestion is most effective when fructose and glucose (saccharides) are consumed at 1:2 and even 1:1 ratios. As opposed to simply eating jelly beans or other confectionery items (which comprise mainly glucose), the ingestion of these two saccharides allows for increased absorption through the gut membranes owing to different pathways of uptake for each saccharide. Utilising a glucose only form of CHO would enable an individual to uptake around 50-60gm/hr of CHO. A fructose/glucose combination lifts this uptake to closer to 90gm/hr. This equates to almost 2x gels an hour of an appropriate fructose/glucose ratio.

But does the increase in CHO uptake mean improved performance? Again, contemporary research would say yes. A recent analysis of research compiled data from studies looking at time or power as a criterion of performance found a small to moderate effect size for utilsing the combination as opposed to either saccharide alone. This research also identified a decreased risk of gastro-intestinal upset owing to the transportation of different saccharides by different gut enzymes. If these enzymes become saturated in either saccharide alone then gastric upset ensues as the gut attempts to remove the saturated products via excretion orally or otherwise. Often exercisers report this symptom which can be owing to the consumption of too much of either saccharide.

So to conclude, eating whilst on the bike is very important. Whilst we have around one hour of energy on board to fuel us through exercise, eating a blend of glycogen and fructose will best enable our bodies to uptake the maximum amount of carbohydrate into our blood stream. This results in increased performance and a reduction in gastric upset. 2x Gels an hour is appropriate for intensive exercise of longer than one hour, with the first Gel being consumed around the 40min mark onwards. Drinking water or a light electrolyte solution will aid in the digestion of the carbohydrates consumed.

4 years ago / Comments Off on Optimising your exercise eating habits

Isomaltulose: What is it and why use it? 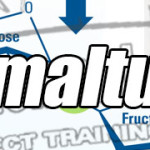 The role of diet in intermittent exercise