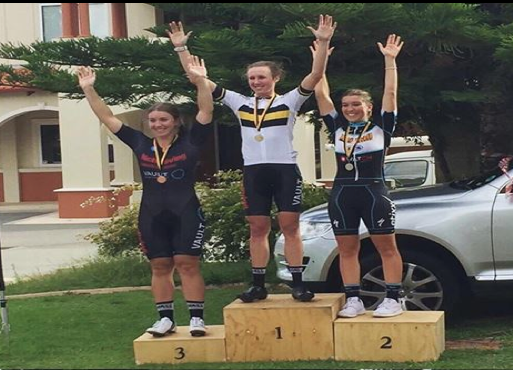 Jess Huston took out the Women’s State Championship at Technology Park in Bentley today. Jess has provided a great race report which provides some insight into racing at the open level and great learning curve for women wanting to take the next step into racing.

So a small but quality field lined up to contest the Open Women’s State Criterium Championship and combined in with the Under19 girls also.

Mel Robinson set a strong pace early and cornered like a demon, leading the pelo round for the first few laps after closing down an attack from the startline by Zoe Clayton.

Various attacks by Wormall and NicheLiving girls set the tone that all the girls were here for some positive racing.

Davina Summers had some early bad luck with a front flat and showed her bike handling skills by keeping her bike upright through the corners as she made her way back to the pits for a wheel change.

At about the 25min mark the decisive break for the day was established with Jess Huston, Rebecca Mackey and young gun Jade Haines. These 3 rolled through at a solid pace, managing to establish a healthy gap early on and then were able to show their strength by ultimately lapping the remainder of the field with a little under 10mins to go.

Once the main pelo was given the early 2 lap to go call and sprinted for third place in the Open Women’s Race, Julia yet again showed her sprinting pedigree and conclusively wrapped up 3rd place.

Then the cat and mice games for the Open Women’s win started. Bec and Jess let Jade escape for line honours while they eyeballed each other and jockeyed for the upper hand to launch a winning attack. Ultimately it came down to the final sprint, with Jess launching out of the bottom corner knowing she had the goods in a one on one sprint.

The Nicheliving Vault Racing Team would like to thank all the volunteers, marshals and club officials for all their hard work and organisation. And to our sponsors, supporters and families who make it possible for women to race.