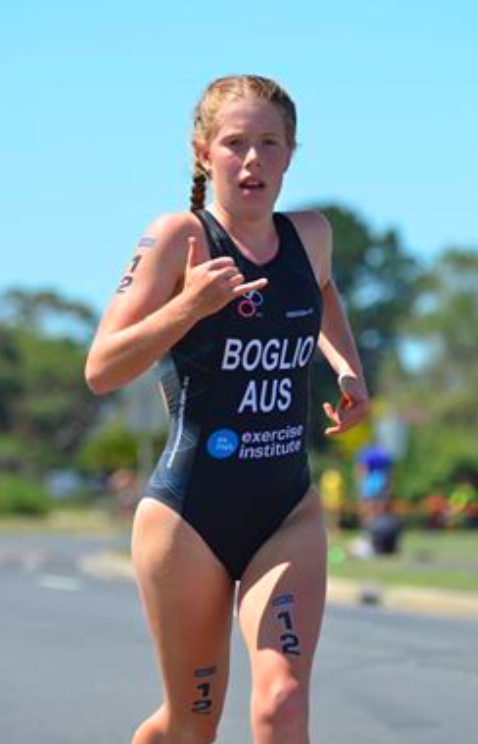 Thursday, 18 February was the start of my trip to Devonport, Tasmania for Race 3 of the Australian Junior Series which also doubled as the 2016 Australian Junior Triathlon Championships. I travelled and stayed with the Break Your Limits squad which made for lots of terrible jokes and good fun.

We arrived in Devonport on an extremely small plane on Thursday afternoon, lucky for me my bike bag was one of two that came on our plane. The other 15 or so arrived on later flights. Thursday afternoon involved a cruisy 6km run along the ocean front, shopping for food and settling into our accommodation.

On Friday morning, we went for a swim at the race venue in the “fresh” water (it was 16 degrees) and I felt pretty good, despite numb phalanges. The race venue was pretty speccy, situated near Mercey Bluff and I couldn’t wait to get out and race the following day. In the afternoon we went for a short ride to check out ‘THE hill’. The bike course involved 4 laps and each lap we would have to ascend an absolute beast of a hill, I don’t know how steep it was but it seemed pretty vertical. The rest of the day involved chilling out, watching fail videos and race briefing. By the time I went to bed I was starting to feel pretty nervous.

Saturday was race day, and lucky for me my race wasn’t until 11:30 as it was pretty cold early in the morning. I spent the morning checking over my gear and watching the live twitter feed of the Youth’s individual race. At 9:30 I rode the short distance down to the race venue, picked up my race pack and started to really think about the race that was to come.

I did the usual run warm up before setting up in transition and getting my wetsuit on. At 11:15 I went for a swim warm up in the freezing water and practiced a few starts by which stage I was pretty nervous.

As we lined up to go to the start I just kept thinking “you can do this, you can do this”. I wasn’t expecting too much, I just wanted to put together a good race and improve on my previous two races in the series (Canberra 15th & Robina 17th). I knew I had improved a lot at training and had put in the hard work, especially those hills on the bike! But hopefully it would all be worth it.

I lined up at the start with the other 24 girls while they played heart beat music, which just added to my nerves. I felt pretty small standing next to everyone else but just held my position on the start line and got ready to race.

Before I knew it we were off, and I had a good start; porpoising out quite far before finding some fast feat to sit on. As I neared the first buoy of the 750m swim I could see a pack forming about 5 metres ahead of me so I put my head down and sprinted hard to get on to their feet. As I tuned around the last buoy I had to do a double take – was that the leaders just 2 metres ahead of me? I kept swimming hard and it wasn’t until I reached the beach I realised I was really with the lead pack. In previous races I had been about 40 seconds behind so I was a bit shocked as I sprinted hard into transition.

I took my wetsuit off as fast as I could with my freezing fingers and managed a quick transition before mounting my bike out on the road. I worked hard to get onto the pack and once I got on it was a big relief. The bike involved 4 laps of 5km, it was windy and hard but I managed to hang on despite a few mishaps. A few girls dropped off the hill but I found it harder on the flat, and at the end of the bike there was a group with myself, Kira Hedgeland, Sophie Malowiecki, Brittany Dutton, Elle Leahy, Zoe Leahy, Ellie Hoitink and Rose Dillon. I felt a bit intimidated, to say the least! My chain came off twice, both after U-turns despite me not even changing gears at that time. Both times, the group got almost 50m away from me and I was lucky to get back on both times.

It was a relief when I got off the bike and got out onto the road with my run shoes on to tackle the 5km that lay in front of me. I knew it would be rough but this time I was prepared for it to hurt. I ran out comfortably hard and built into it by increasing my turnover and staying light on my feet. I felt good on the run for the first time in while, which showed me that all it takes is perseverance and time. It was still an average run compared to what I’m capable of at training but I could not be happier with my race as a whole. I crossed the line in 9th, my first top ten and undoubtedly my best race of the series.

Looking at my race I could not ask for more. To be able to race with some of the best 16-19 year olds in the world and travel to amazing places with my good friends is pretty awesome, and to have one of the best races of my life just topped it off.

I spent the rest of the day watching the Junior boys race and a big pizza dinner with the crew.

On Sunday, there was a mixed triathlon relay where teams of 3 (2 boys, 1 girl) each completed a small triathlon. WA’s teams were a bit all over the place but it was still good fun even though my legs were really tired from the day before!

The trip to Devonport was one I will not be forgetting anytime soon and I would like to say a huge thank you to everyone who made it what it was.

So thankyou to firstly my mum, you are a legend, and my dad, Zac and especially my grandpa. Also thankyou to Brad Hall, Steve Gleeson, Lenny Hughes, Gab Cipriano and Greg Hodge for your coaching expertise. And thankyou to my sponsors, The Exercise Institute for all the excellent training, Aquaman Aus for the fast wetsuit, FOHER Multisport and Coeur Sports. And last but not least, everyone I train with, without you guys I would not enjoy what I do so much, so thankyou.

4 years ago / Comments Off on Cassia Boglio reports from Tasmania