BY admin IN Exercise Institute News On November 19, 2014

I first came to Brad as a Triathlete 12 months ago. My primary focus was Busselton 70.3 in May (2014) this year. I really enjoyed Brad’s training style and working with him got some excellent results throughout the season and particularly at Busso – sub 4:45 time, 26minute PB, top 30 finish and only missed out on World Champs qualification by 1 place. Well and truly met and exceeded all my goals for this race!!

The inevitable question came from Brad after Busso – What next?

I had already signed up for Ballarat 70.3 in November 2014 where I was looking to push myself even further. With time before Ballarat I mentioned to Brad that I might try my hand at some road racing over winter. No sooner had I voiced the idea than the West Coast Masters races became a permanent fixture on my training program.

At first I thought the transition would be fairly straightforward. I knew I was fairly fit and reasonably strong on the bike…. I learnt two things very quickly:

Time to change up the training program…

Brad asked me around midyear to join one of his teams for the Tour of Margaret River. This was going to clash with Ballarat 70.3 but given the opportunity of a new challenge I took up Brad’s offer.

Training at this point was focused around improving my top end power, my ability to work above threshold for short periods of time and generally withstand the rigours of road racing over four days.

These were supplemented by activities designed to get me used to the increased volume and intensity that would be required in Margaret River.

The week leading into the Tour I was feeling great and in my best ever form – Thanks Brad!

Here’s the team of likely gentlemen that Brad pulled together for the HCT team!

This was a 25km Team Time Trial over a 2 lap course around Cowaramup and through Howard Park Winery. Finishing position from this stage would determine the teams racing category for the following days.

My biggest concern for today was getting spat out the back early on leaving the guys to fight the weather with a reduced team.

Somehow we had managed to pull one of the last start times for the day rolling out at 4:45pm. This allowed two things to happen – my nerves to build significantly and the weather to turn from bad to horrendous.

By the time we were warming up the temp had dropped, the rain had come in, the wind was blowing consistently at around 30km/h and gusting at over 40km/h. I don’t carry a huge amount of weight, so warming up turned more into an exercise of not freezing than actually warming up.

We had only done a few TTT practice runs prior to the event but as soon as we took off we all clicked perfectly. Communication was good, everyone was pulling their turn, road position was excellent and we were moving very quickly!!

Everything was going smoothly until we hit Howard Park for the first time. The openness of the winery saw us slammed by a gusting crosswind and piercing horizontal rain (honestly, it felt more like hail). Visibility was terrible but communication stayed solid and we pushed through this section without losing too much time (and somehow staying upright).

We ended the race with five of us across the line together… I was ecstatic to be one of them! I knew I had ridden hard but the data showing my Average HR and Normalised Power over the 38min effort more than confirmed it!

We were all stoked with the performance and knew immediately that Brad had pulled together a team of guys of similar ability and drive!

What lovely weather we are having!

This was a fairly rolling stage for the most part with a steady 3km climb to the finish line in Augusta.

Going into this stage I was still not overly confident in my own racing ability and what the pace of Cat 3 would be like. My plan therefore was fairly simple; keep out of trouble until we hit the climb and then throw everything at that last 3km. I knew I was climbing fairly well and being one of the lighter guys around I thought I could hold my own if I wasn’t too tired getting there.

An 8k neutral zone was good to flush the legs after the TTT the night before and after the restart things kicked off at a steady pace but nothing too drastic. A break got away quite early on one of the longer climbs of Caves Road. Not long after the break started to gap I catch a glimpse of the blue HCT jersey of Bevan Tarrat winding up from the back of the peloton. Big gear, low cadence, huge power – he rides off the front and fights his way up to the break.

Now, with nearly all teams represented in the break the peloton sat up and the next 60+ km turned into more of a Sunday group ride than a real race. My plan became that little bit easier to execute.

The 13 man break absolutely smashed it and put 9mins on the peloton by the finish (and a finishing time quicker than Cat 2). Bevan had a great day with a 6th place finish!

I started the climb a little further back than I would have liked but was feeling quite fresh. I buried myself in those last few kms and crossed the line 11th out of the peloton and 24th place overall.

Stage 2 – Preparing for the final climb

Another rolling stage with a couple of slightly longer climbs within the last 10km.

After the break was so dominant in Stage 2, we were pretty confident this would be a fast and furious stage from the outset. We weren’t wrong and Brian was certainly doing his bit at the front to drive the pace upwards and splinter the peloton early.

A 10 man break got away on the same climb as Stage 2 but unfortunately this time our team didn’t have any representation. Bevan, Brian, Simon and myself buried ourselves for the next 20 odd km trying to pull the break back but with little help from other teams we couldn’t quite bridge the gap.

The HCT team continued to put the pressure on for the whole race and drove a very high tempo. We all put in a series of attacks and almost managed to get away but nothing quite stuck unfortunately.

The break ended up finishing 2 mins up on the Peloton. I managed to get 6th in the bunch sprint and 16th overall for the stage.

Although the HCT team didn’t have any exceptional results today this is the stage I am most excited about from the tour. We worked really well as a team to put pressure on the peloton. Personally it was the stage where I was the most active and realised maybe I did have what it took to compete in a road race!

Don, Simon and myself after a tough Stage 3. Excited but struggling to stand upright.

After a short break following stage 3 we joined the Tour of Gracetown charity ride for a 45km ‘social’ ride back to Cowaramup.

I would have to say this was a lot more than a ‘social’ ride, especially after a very tough race less than an hour before hand. Another 400+ meters of climbing and a fairly steady pace saw us all back into Cowaramup and ready for a nap!

This final stage followed 3 laps of a 17km circuit around Cowaramup.

Initially we thought there would be a lot of tired legs in the peloton and the race may kick off at a steady and civilised pace. How wrong could we be!! The tempo was high immediately with constant attacks being launched right from the starters gun and not looking like they would let up any time soon.

I was feeling pretty tired from the previous day so tried to stay out of the wind and out of trouble as much as possible over the first lap to get the legs ticking over. Meanwhile Brian, Bevan and Simon were working hard up front chasing attacks and putting in a fair number of their own!

A break finally got away during the second lap and the pace eased up a touch while everyone caught their breath. Then came the chase, driven in a large part by the HCT team. The break was pulled back about half way into the 3rd lap and everyone started jockeying for position ready for the sprint finish.

A rooky mistake on my part saw me out of position on the inside and not really able to compete in the sprint to finish 19th for the stage.

Brian who was never more than a few wheels off the front all day had a great result finishing in 6th and Simon sprinted home for a 13th place. Three HCT reps in the top 20 on the final stage, not bad!

I finished the four days tired, but really happy with my performance. My results were pretty consistent across all of the stages and I was an active member of the peloton.  I managed to finish 24th in our Category on GC and second placed overall from our HCT team.

All in all this was a great experience with a great bunch of guys. I personally feel I learnt a huge amount from my team on the art of racing and racing as part of a team. The training program pulled together by Brad definitely made me a more ‘all round’ cyclist and delivered me to the start line in the best form I have had.

Thanks to all the guys in my team for making this a really memorable experience and to Brad for pulling together such a hard working team!

Definitely more road racing… and hopefully a chance to team up with the guys again for another event!

6 years ago / No Comments 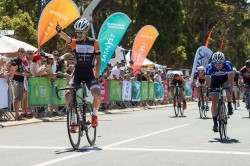